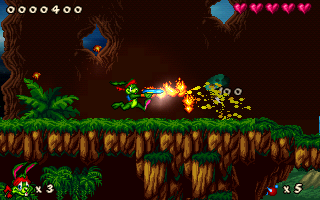 In a surprise discovery, a copy of Jazz Jackrabbit 2 for the SNES and Genesis has been discovered from 1986, the game’s original year of creation. Unfortunately, Epic Games was unable to find a publisher for it at that time, and it languished in a warehouse while every game ever released on either console directly stole level and item graphics from it.

“I’m honestly shocked,” said one habitual commentator who spoke with Jazz 2 Online on the condition of anonymity. “I think that I hate every game ever made now, except for Jazz Jackrabbit 2 of course.”

The original console prototype currently rests within the collection of a collector with no interest in dumping it to a playable ROM image, but he has agreed to part with the cartridge for a mere $25,000. Fortunately, if every Jazz 2 fan agrees to donate a mere one thousand dollars each, the cartridge should be ours in no time!

Is this like, “1986 called, it wants its name recognition back?” Its timing is impeccable – I think we’d be fools not to jump on this lagomorphic April deal. The one remaining piece of Jazz Swag in the world not owned by our Cleveland-Browns-empathizing community can be ours! Just wait 4-6 weeks, shipping and handling costs not included.

I want that tileset :(

Where is the donate button?