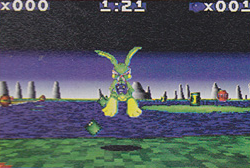 Until today, there had been only nine known screenshots taken of Jazz Jackrabbit 1 before its release. featuring such oddities as different character sprites, a different HUD, simplified ammo pickups (explaining the references in the game’s manual to “red orbs,” “green orbs,” etc.), and indications of a different planet order.

New magazine scans from PC-King, however, almost double that number, with seven new images from a never-before-seen stage in Jazz 1’s development, appearing to have been taken earlier than almost every other known screenshot. Check them out!

Oh, wow! This is pretty cool.