JCS has always provided us with such so much easy-to-use power that there’s never been much of a drive to create fangames for Jazz Jackrabbit, and the introduction of AngelScript, like such earlier additions as Karrot Shire, have only served to further solidify the place of Jazz Jackrabbit gameplay experimentation as firmly inside of Jazz 2 (and very occasionally Jazz 1) itself. The only Jazz fangame to be finished and reach any level of prominence was et’s Jazz Ski Rabbit in 2001, which justified its standalone executable status by mostly eschewing platformer gameplay. 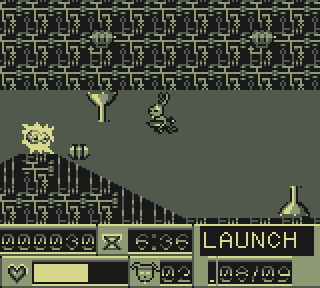 And yet, not so with Bun & Gun, a “a high-speed run-and-gun platformer where you play as Bun E. Bazooka in an attempt to save the Jade Kingdom from the vile clutches of the surprisingly-vampiric turtle Shelltopias Turtatory Von Turtula.” Created by happygreenfrog for the Demake game jam, Bun & Gun stays carefully on the friendly side of copyright laws while recreating most of Jazz 1’s shareware episode (Diamondus/Tubelectric/Medivo, with their full array of weapons and enemies included) within an even smaller resolution and a four-color palette. Download today!

Awesome! Shoutouts to our boy HGF for making such a solid demake in such little time.