mods.jazz2online.com, an index of all module music that can be found on J2O, searchable by keyword ("space", "nature") is back after being down for a good while. - Stijn

Welcome to anyone just joining us from Rock Paper Shotgun! The major misconception from RPS’ writeup that you should be quickly disabused of: actually, Jazz 2 has had a map (and tileset) editor since the day it was released, meaning we have many thousands of custom downloads for you to check out. :) Or just join an online server hosting some of them.

For everyone else reading this: hey, everybunny, we got on Rock Paper Shotgun!

Omri Lahav is back with a brand new JJ2 soundtrack guitar remix. The soundtrack he remixed this time is Hell Freezes Over. Give it a shot!

This year’s anniversary celebrations have ended. We hope you enjoyed hanging around!

Be sure to write about your impressions in the JCF thread.

The Bash is being streamed by FawFuL right now!

The Anniversary Bash server is up, marking the seventeenth anniversary of Jazz Jackrabbit 2! The level list is already available for download, or you can read the names below if you’re still on the fence:

Thanks to BlurredD for hosting the servers this year, FireSworD and Blacky for curating the lists, and you for keeping this game alive.

At long last, a new update to JJ2+ is finally out! 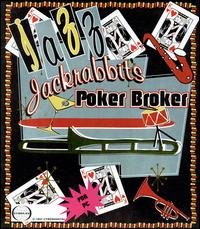 Welcome back once again to the Jazz Jackrabbit’s Poker Broker Weekly Update, where the JJPBO staff details their experiences brokering poker. Broking poker. Breaking? Poking? Anyway, this is Update #1040; if you’ve missed a week or two, you can catch up on previous updates here.

I started my game with a $5000 stake and a standard $100 bet. I know the folks at jazzjackrabbitspokerbroker.net have been talking about lowering the bet to $3 but I’m a traditionalist. I got dealt the King of Spades and a bunch of middle cards, some straight potential but mostly inside and I’d need two draws. Unfortunately the interface was arse backwards and I discarded the King, gaining a pair of fours, which lost to another pair. I guess. I don’t actually know what my opponent had.

Next round was no better. Held onto a 9 and 10; got some higher cards and very nearly a straight, but drew a 3 instead of a J. Lost $100 again, which I believe the cool kids call “jazzing it.”

Third round I was torn between holding onto my pair of 5s vs. some serious flush potential in the heart quadrant. Opted for the pair and ended up with two-pair, winning back $200. Up to $5000 now, and decided to go all in. I know Chiyu tried that once and no one ever heard from him again, but I had a good feeling about the next hand.

Unfortunately it turns out this game doesn’t actually let you go all in, and anyway my pair of Jacks was rewarded with the message “Higher pair, even money.” Nobody won. Truly, when you play Jazz Jackrabbit’s Poker Broker, nobody ever wins. Not even the Nguyens. Not even you.

See you next week for more exciting broken polkaing action!